I just watched FBI Director James Comey make his announcement that his agency is NOT recommending that charges be filed against Hillary Clinton for her blatant “mishandling” of classified information on her home-brew email setup.

He confirmed that there were hundreds of such emails on her jerry-rig setup, with classifications ranging all the way up to Top Secret SAP (Special Access Program); that any and all people cleared for access to classified data are presumed knowledgeable about the requirements for how such data must be handled; that even unintentional security breaches can be considered criminal offenses; that she forwarded emails containing such information to people outside government employment; that she used her wireless devices while in venues and countries where they were extremely vulnerable to being hacked; that the feds had no idea if they were even able to review all the appropriate emails because of the “cleansing” to the hard drives done by her legal team before turning the drives over to the feds; yet he claimed that her political status had nothing to do with the decision not to recommend prosecution.

To quote Comey: “To be clear, this is not to suggest that in similar circumstances, a person who engaged in this activity would face no consequences.”

Gee… I wonder what former General David Petraeus thinks about that last claim. I guess he must think it’s a real bummer he wasn’t a Clinton when HIS case was being considered…

Translated into the plain English normal people use, Comey’s saying that Clintons don’t have to obey the same laws as the rest of us mere mortals. 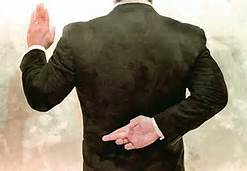 Comey also claims there was “no political influence” on his decision. Um… yeah, right. Bill Clinton boards Attorney-General Janet Lynch’s airplane at Phoenix Sky Harbor airport and has a completely private “conversation” with her for 30 minutes, and we’re supposed to believe that was mere meaningless coincidence. At the exact same time that Comey’s making his announcement Her Royal Arrogance Hillary is on an airplane WITH OBAMA on a pre-announced campaign jaunt, and we’re supposed to believe that it’s not meant to be interpreted by Comey and his minions as a clear signal that he should leave her alone.

“Nothing to see here, folks. Move along”. Or, for fans of The Wizard of Oz, “pay no attention to the man behind the curtain”.

As a person who held a Top Secret clearance, let me explain the requirements for how classified material MUST be handled by law, and the issue of “intent” Comey glossed over.

All classified material must be either in a person’s personal possession, and/or secured in an approved container or facility. It may not be taken from its normal facility except in certain instances, and then only with prior authorization. Period.

Any time you’re not actually using a classified document, it must be secured. That means returned to the safe or lockable file cabinet in which it’s normally stored, or in the case of certain types of documents, returned to the secure storage room.

Let’s say it’s the end of your work day and you’re going home. You forget to return a document to the secure safe and leave it on your desk. Guess what? You just committed a security violation, and you’re gonna be cited for it. I’ve known of people who lost their clearances just for doing that, and that’s CLEARLY unintentional, a mistake.

It’s the end of the workday, and you decide to throw that document in your briefcase and take it home to work on it there. That’s a HUGE no-no, and not only will you be cited and lose your clearance, but you’ll probably be criminally charged, too. And since you INTENDED to take it home, that was clear “intent” to circumvent the law.

Note that there was no “intent” to commit espionage by trying to give it to another entity. There was merely “intent” to circumvent the rules on how to handle documents.

Petreaus was criminally charged under circumstances similar to that last example. But Clinton did EXACTLY the same thing, INTENTIONALLY circumventing the rules on document storage and handling. It was her INTENT to ignore those laws. It wasn’t an “accident” that she had an unsecured server at an unsecured location; it was done ON PURPOSE. Whether or not she “intended” to give the data to other unauthorized people is COMPLETELY IRRELEVANT.

That, friends, is the law on handling classified information and documents.

Those servers didn’t just accidentally fall out of the sky and set themselves up in her bathroom.